Munich: A Place For Covers 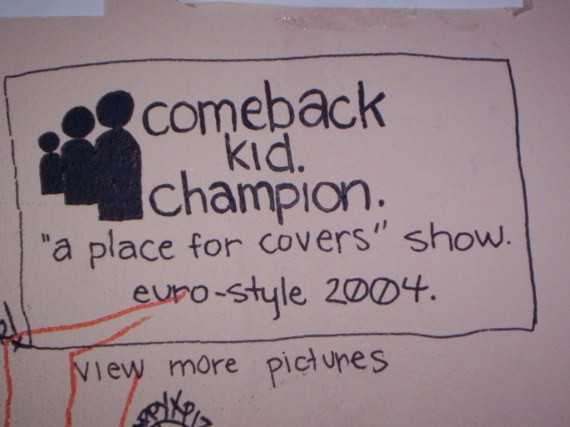 One of the funnest shows I’ve ever played had the potential to be a huge bust.

Champion toured Europe with Comeback Kid in summer 2004. Promises Kept was fresh off the presses and Wake the Dead would be released shortly. Munich had a pretty small scene at the time and the show was in a tiny venue, which is usually fun, but the stage had a really weird setup. It was basically just a series of platforms of varying height set up awkwardly enough so that you couldn’t really move at all. The room was too small to play on the floor, so you had to play on these artsy platforms.

The show was supposed to be a three-band bill, but the opening band canceled. So it was just Champion and CBK. We were all a bit apprehensive about the coming show, expecting a really awkward vibe. As various members of both bands recognized the potential for a less than stellar evening, we started to discuss what we could do to make the night memorable.

We threw out the idea of doing some band-member swapping and maybe some punk rock karaoke, drawing out a list of potential covers that individuals knew. Here’s how the plan played out:

I don’t remember all of the covers we played, but various members of Champion and CBK morphed a number of makeshift lineups and tons of different people got to sing different covers. Marco from Avocado Booking/Paint the Town Red sang Chain of Strength, Peter from Team Killer sang Pride, by Madball. Our roadie sang Minor Threat… we also did Glue, by SSD; Alone in a Crowd; Gorilla Biscuits; Young Til I Die; another Chain of Strength song; Ready to Fight, by Negative Approach… I believe we were one person short of even doing Damnit by Blink 182!

It was such a memorable night. There weren’t a lot of kids there and the stage was a mess. But that didn’t matter. Every kid in that room had a smile from ear to ear as they piled on and sung along. 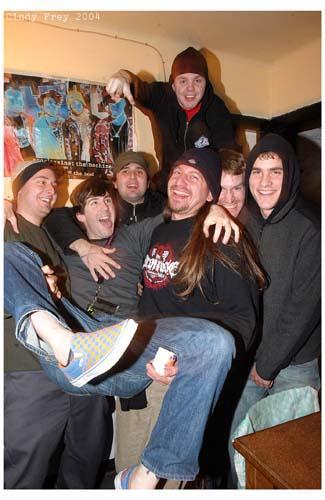 I’ve never been one to tout my own bands for greatness or anything, but one thing that I’m really proud of, when looking back at Champion’s legacy, is that we had a knack for turning potential bust situations into incredible memories. It was all about the attitude of; we’re going to put everything we have into this show no matter what the circumstance is and we’re going to make this night memorable.

I see so many bands that blow off smaller shows, or let their disappointment show from the stage and that bums me out. If there’s one kid that paid to see your band, or even made the effort to leave their apartment to come watch you play, you need to check yourself and check your ego at the door and play your heart out. If you want to be a rock star, learn a few more chords and play another style of music.

I can say with complete sincerity that Champion never mailed in one single show, out of the hundreds we played. In fact, some of the smallest shows we played, or in the weirdest venues, were some of the most memorable, Here are a few snapshots:

These are just a few off the top of my head, but putting 110% into tiny shows in tough situations was definitely not exclusive to us. If you have any fun memories of your band playing wild weird shows, please share them in the comments section. Or if you have good memories of seeing great HC bands kill it in less than ideal situations, please share. Would love to read em!

Thanks to Scott Wade for the photos!

UPDATE: Andy found this picture of our covers set list from that night.. We added a few more songs, as noted above, but here it is: 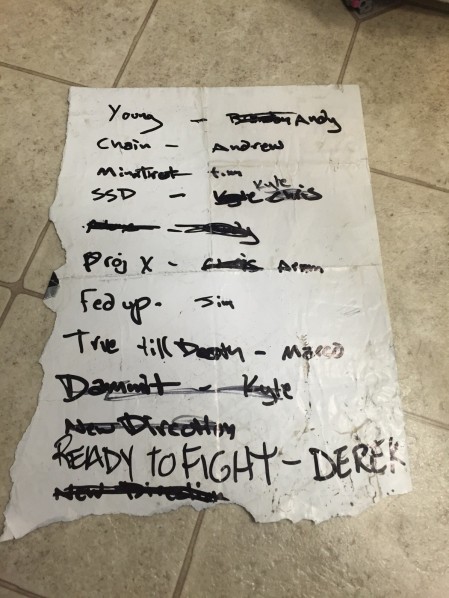