“What Would Outbreak Do?” was a slogan that became popular in the Champion van after we played a few shows with these freaks from Maine.

Houston Texas wasn’t our first show with Outbreak. We had played with them once before in New Jersey. But in Houston, they joined a fun little tour with did with Comeback Kid, The Distance and Some Kind of Hate. When they rolled up to Mary Jane’s, spilled out of the converted ambulance shirtless, pushing their amps on skateboards into the club, you could tell there was just something about these kids.

At this point, Nate Manning (their drummer and current Cruel Hand guitar player) was still in high school, so they had a series of fill in drummers throughout the tour. In New Mexico, some kid they didn’t know volunteered–via Myspace–to play the set with them on drums, with no practice. They didn’t care. They loved hardcore and they just wanted to play it to whomever wanted to listen. Even missing one day playing their fast thrashy brand of HC on this tour was a tragedy.

The ambulance they were touring in was a mess. It didn’t have air conditioning and it was over 100 degrees in Texas, so they bought an apartment unit air-conditioner… you know… the kind you hang out the window of your apartment… the kind that crushed the poor old woman in Happy Gilmore… They bought one of those units and hung it out their passenger side window. Clearly that didn’t work… so they ditched the AC and drove with their van’s side door open. This wasn’t a sliding door, it was a gate… so basically they had a fin on the right side of the van pushing the vehicle to the left… until they were pulled over by the police and told they couldn’t drive on the freeway with their side door flapping open.

As mental as Outbreak was off the stage, they were even crazier with guitars in their hands. Their set at Posi-Numbers 04 was one of the wildest things I’ve ever seen in hardcore. Words cannot do justice to the insanity of that set. You’ll just have to watch the YouTube yourself… but just know there was plenty of craziness not caught by those cameras. Those hidden highlights are burned into the memories of everyone involved in that sweaty sea of bodies. 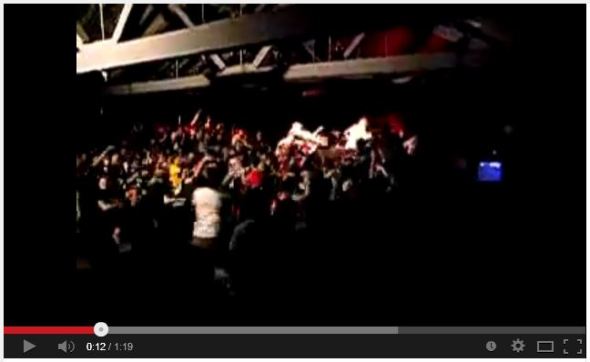 Their wildness wasn’t reserved for fests though. Outbreak was super energetic live and always gave 110% whether there were 300 kids or three. They gave no regard for their instruments, or their bodies, or eachother’s bodies. I’ve seen Linkovich climb up onto rafters or swing from hanging P.A.s while “playing his guitar” the guitar slung back over his shoulder. I’ve seen Ryan smash the mic into his forehead until it was gushing blood (before that move became trendy). I’ve seen Chuck throw his guitar into the crowd. I’ve seen Joey knocked out cold.

When their band stops playing those same wild animals went just as crazy for the other bands, flying off stages, dog pilling, two-stepping and floorpunching. I’ve seen members of Outbreak exit the back of many pits with bloody noses, lumped up foreheads and at times, carried out unconscious.

These dudes sweated and bled hardcore. They loved it and they lived it. So, What Would Outbreak Do? Whatever they did, they did it to the hardcore fullest. I couldn’t get enough of this band, or these dudes. Champion toured with them easily more than we toured with any other band. When we were out with them and Agnostic Front, Vinnie Stigma too fell instantly in love with these kids. When they played, Stigma would scream from the back of the room, “THIS IS HARDCORE!!!” The ultimate stamp of approval.

If you haven’t checked out Outbreak, I recommend starting with the “Failure” record. It’s got Bad Brains riffs for days. I’m not sure if Outbreak is a band anymore. I know they had some lineup changes and aren’t touring constantly like they used to, but some of the guys are in another great band called Cruel Hand. They also have another cool side project called DNA.

Post your Outbreak memories in the comments section, Go!